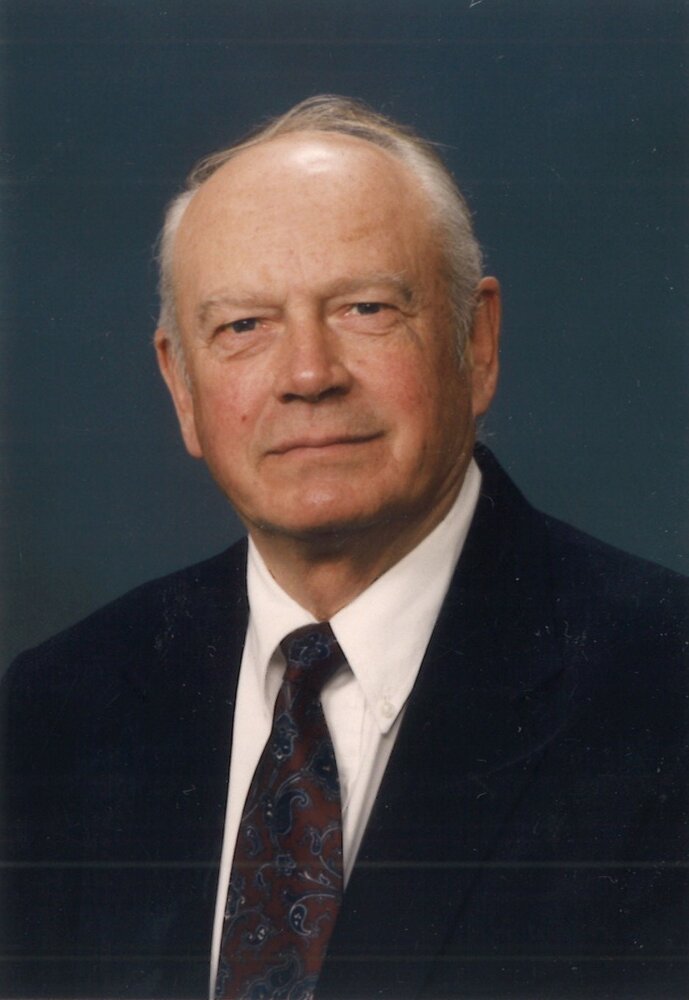 Bill, son of Earl and Mary (Dempewolf) Ross was born September 28, 1931.  Bill was the third of five generations to call Eaton, Colorado home.  He felt blessed to have been raised in a small town where he learned hard work, responsibility, honesty, compassion, loyalty and integrity.  Bill’s early years were influenced by the Depression and World War II when boys were expected to go to work at a young age.  He worked for his Grandfather helping the thrashing crew and at the Hut Club, a popular local restaurant.

Bill graduated from Eaton High School in 1950.  While in high school, Bill was active in sports participating in football, basketball, and track.  His 4x100 relay won the state title in 1949 and 1950. They held the Eaton record for more than 50 years.

Upon graduation, Bill entered the U.S. Air Force.  He served four years as a military police officer stationed at Hamilton AFB in California and Eielson AFB in Alaska.  While in Alaska Bill guarded the atomic bomb.  He also played basketball and participated in two Air Force World Basketball Tournaments in New York and Florida.  Bill was always proud of his military service.

Returning to Eaton after the military, Bill married Patricia Schroeder in June of 1956.  He went to work for Kenny Hyde Clothier.  This was the same clothing store that was established in Eaton in 1902.  The store remained in business for 88 years.  Bill, along with his wife Pat, purchased the store in 1968 renaming it Ross’ Clothing.  They opened an additional clothing store in Windsor in 1976.  Bill knew the majority of his customers by name and also knew their sizes and preferences.  The store in Eaton was a great gathering place to discuss the current farming conditions, local sports, and other issues of importance.

Bill showed his compassion as he was always quick to help kids in need of clothing.  He wanted to see the Eaton business community grow so he purchased the entire block of buildings along the north side of First Street.  His vision was to enable individual businesses to open and thrive.

Bill had many family oriented hobbies.  He was a sports and outdoor enthusiast.  He enjoyed bowling, playing golf into his 80’s, camping, boating, and waterskiing. He enjoyed traveling with his family and friends.  In addition Bill was a football referee for more than 10 years.  He loved attending his grandsons’ sporting events along with other Eaton High School athletic activities.  Bill was thrilled when each of his grandsons won multiple state titles at Eaton High School.

Bill was quick witted, had a great sense of humor, and was always the life of the party.  He had a big heart and a deep love of animals. Bill was dedicated to his family first, the Town of Eaton and important causes.

Bill is preceded in death by his parents Earl and Mary (Dempewolf) Ross and his older brother Dick.

Bill is survived by his wife of 65 years, Pat, his two daughters Kelly and Lori both of Eaton, and two grandsons, Drew Geisick of St. George,  Utah and Adam Geisick of Eaton.

Bill’s legacy will continue with the values of a strong work ethic, respect, compassion and dedication he instilled in his children and grandchildren.  Bill was the family’s “True North” if it’s right, it’s right, and if it’s wrong it’s wrong.  We are because he was.

It was Bill’s request to have no services.  Private family inurnment will be held at the Eaton Cemetery.   Bill’s Life Celebration will be held on Wednesday, June 1 from 1:00 – 3:00 p.m. at the Adamson Reception Center.  In lieu of flowers, please consider a contribution to the “Eaton Historical Society” in care of Adamson Life Celebration Home, 2000 47th Ave., Greeley, CO 80634.  Friends may leave condolences at AdamsonCares.com.

To send flowers to the family or plant a tree in memory of William Ross, please visit Tribute Store
Wednesday
1
June

Share Your Memory of
William
Upload Your Memory View All Memories
Be the first to upload a memory!
Share A Memory
Send Flowers