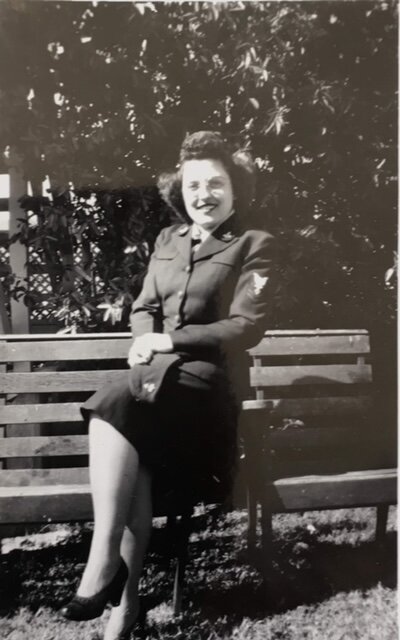 Virginia Mae Anderson - beloved daughter, sister, wife, mother, grandmother, mother-in-law, aunt, and friend - passed away in Loveland at Hillcrest Senior Center on March 3, 2022.  She was just six months shy of her Centenarian birthday when she passed at 99 (Betty White style!).

Virginia was born on August 6, 1922 in Englewood, Colorado, where she was raised and attended St. Francis de Sales Catholic High School; upon her graduation she took business classes in Greeley.  In 1942, President Roosevelt signed the Navy Women's Reserve Act into law, which created what was commonly known as the WAVES - a division of the US Navy allowing women to serve for emergency service.  Virginia enlisted as soon as she was able and proudly served from 1944 to 1946, when she was honorably discharged.

On March 2, 1947 she married Ray L. Anderson in Cheyenne, Wyoming.  They settled on the family farm outside of the Galeton/Eaton area, and had two children, Ginny and Robert (Bob).  Virginia was a homemaker and caretaker for her entire family - she supported Ray in his farming endeavors and loved being  a mom.  Time on the farm allowed her to develop her amazing culinary skills and she became a ‘foodie' before being one was a thing.  She was known for her juicy brisket roasts ('low and slow is the way to go’), chocolate cake, and her specialty was her super rich chocolate chip cookies.  She enjoyed them as much as everyone else and would always note that 'eating the dough is the best part!’.

In later years, she became Grandma Pumpkin, or ‘Punkin’ in short, and was adored by her five grandchildren.  Virginia excelled in her senior years and was always busy.  She became an active member of the Galeton Community Church where she sang in the choir, she valued her health and took aerobics classes and also exercised at home, she fulfilled her creative sprit by painting and crocheting, and also fed baby dairy calves twice a day for years when Bob purchased the farm.  In 2010 she was able to travel to Washington DC on an Honor Flight and it was a very special memory she spoke of often.  Virginia loved her family, loved her country, and was one of the most honest souls one would ever hope to meet; she is deeply missed by all who knew her.

She is survived by her daughter Ginny Anderson Taylor and husband Jim of Charlottsville, IN; her daughter-in-law Sandra Anderson of Greeley; her grandchildren Nikki and husband Greg, Mark and wife Taryn, Lisa and husband Luke, Jodi, and Amanda and husband Louis; her great-grandchildren Lauryn, Shavaun, Daniel, Grant, Jacob, Milena, Benjamin, Lilly, and Jaxon; great-great-grandson Carter; her sister-in-law Lynn Alexander, brother-in-law Earl Anderson and wife Joan; and many nieces and nephews.  She was preceded in death by her husband, her son Robert, her twin Dorothy Mae who passed at birth, and other siblings Helen Mae who passed at 10 days of age, her brother Edwin Alexander, and sister Rose Erb.

A celebration service will be held 2:00 p.m. Friday, March 18, 2022 at Adamson Life Celebration Home.  Private Interment will be at Eaton Cemetery.

The family would like to give special thanks to the caregivers at Hillcrest in Loveland. Virginia’s last years were filled with endless activities and special relationships she developed during her time there, and it was the perfect environment for her to thrive in the sunset of her life.   Hillcrest has an impressive saltwater fish tank (not an aquarium!) in the entrance area and it is a favorite among guests and residents.  As such, memorial contributions may be made to Hillcrest of Loveland to be used for the upkeep and maintenance of the fish tank, in care of Adamson Life Celebration Home, 2000 W. 47th Ave., Greeley, CO  80634.

Friends may send condolences to the family at adamsoncares.com

To send flowers to the family or plant a tree in memory of Virginia Anderson, please visit Tribute Store
Friday
18
March

Share Your Memory of
Virginia
Upload Your Memory View All Memories
Be the first to upload a memory!
Share A Memory
Send Flowers