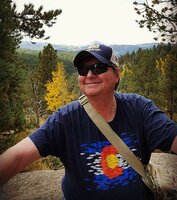 Carl moved several times throughout his young life, living in Greeley, Denver, Aurora, Colorado Springs, Aspen, Germany, California, and Texas where he graduated from Duncanville High School. Because Colorado was always in his heart, he attended the University of Northern Colorado, and after graduation joined the United States Army and continued seeing the world. He joined the Army National Guard after 9 years of active duty, returned to his home state of Colorado, continuing to work for the Department of Defense as a civilian with NORAD at Cheyenne Mountain, and Air Force Space Command at Peterson Air Force Base. Carl served in the military for 26 years, both in the United States Army, Army National Guard and Air Force Reserves.

When he wasn’t working, he enjoyed fishing, hiking, skiing, debating others about politics, driving in the mountains, watching the Broncos, watching John Wayne movies, listening to John Denver songs, and educating others on everything that Colorado had to offer. He was most at peace when he was in the mountains listening to a flowing river and hearing the wind blowing through the Aspen leaves. He would continually remind his sister that Colorado had 14'ers (mountains over 14,000 feet high). Carl was a master at puns and jokes, and he didn't seem to mind when people would sometimes cringe at his jokes. He was a true patriot that loved America.

He is preceded in death by his mother Diane George, and grandparents.

Any memorial contributions should be made out to The Wounded Warriors Project. Carl would also prefer anyone wishing to honor his memory go hiking, fishing, skiing or driving in the great Rocky Mountain 14’ers of Colorado.