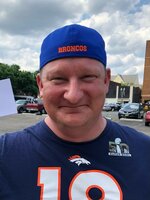 Chad A. Kuhnel, age 42, of Windsor, CO and formerly of Chadron, NE, passed away unexpectantly in his sleep on January 8, 2022 in Windsor. Chad was born on October 17, 1979 to Nancy Kuhnel in Chadron, Nebraska. They moved to Colorado when Chad was 7. He graduated from Greeley West High School in Greeley in 1998 and Colorado State University in 2008. In May 2008, he began his career at Northern Water in Berthoud where he was employed as a Water Efficiency Specialist at the time of his passing. In 2013, he married the love of his life, Kodi Toman. To this union were born Kendall Mary and Claire Elizabeth. Chad was known for his infectious sense of humor and made friends everywhere he went. He loved the Denver Bronco’s, camping, music, horticulture, and most of all, family. He made friends with everyone and was known for keeping relationships going. He was the glue. Chad is survived by his wife and children; sister Cheryl Donner, numerous aunts, uncles, cousins, nieces, nephews, and friends, all of which are devastated by the untimely loss of their beloved Chad. He was preceded in death by his mother and grandparents. Mass of Christian Burial will be 11:00a.m. Friday, January 14, 2022 at St. Mary’s Catholic Church in Greeley. A graveside service will be at 10:00a.m. on Wednesday, January 19, 2022 at Chadron Calvary Cemetery at 10th and Maple in Chadron, NE, followed by a luncheon at 11:00a.m. at St. Patrick's Assumption Arena, 340 Cedar St, Chadron, NE. In lieu of flowers, memorial contributions may be made to the Chad Kuhnel Memorial Fund in care of Farmers Bank located at PO Box 220, Ault, CO 80610. Venmo donations can be made to Chad Kuhnel Memorial @Kodi-Kuhnel. Friends may send condolences to the family at adamsoncares.com.