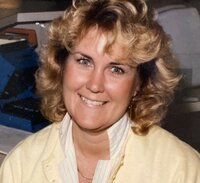 Diana Lee Brunner passed away Sunday, November 28, 2021, at the age of 70 with her husband by her side. She had been struggling to recover from a stroke she suffered in March 2021. She was born November 21, 1951, to Duane and Delores Longwell. She was the oldest of two daughters and was raised in Wellman, Iowa, where she graduated from Mid-Prairie high school in 1970. She moved to Colorado with her then husband James Ropp and had her only daughter Jackie. Upon divorce, she Married Gary Lee Schwartz. Together their family of four consisted of Wendy and Jackie. They spent their summers camping, fishing, and four-wheeling with friends until Gary’s death in 2012. She married her husband Darrell Brunner at the Chapel of the Bells in Las Vegas November 15, 2016. They loved to spend time doing fun things together: playing the slots in Vegas, camping at the cabin in Red Feather, and watching the wild animal camera near their spot on the lake. Their favorite thing was to spend time with friends and family. She spent the majority of her career working for Banner Health in the Emergency Department, followed by the Cardiac Cath Lab, until she retired in 2017. She was passionate about her role in the Cath Lab and had the honor to coordinate the yearly Cardiac Conference held at University of Northern Colorado. In her spare time she enjoyed many hobbies. She was an avid gardener and thoroughly enjoyed any craft project she could get her hands on, especially scrap booking and mixed media, with her girlfriends. She is survived by: her husband Darrell Brunner, daughter Jackie Ropp Bischmann (Patrick Phelan), step-daughter Wendy (Jesse) Mendez, step-sons Dennis (Dee) Brunner, Christopher Brunner, her mother Delores Longwell-Aller, mother-in-law Sherron Brunner, her sister Denise Fritz (Michael) her niece and nephew Courtney Fritz and Brady Fritz (Kaitlan) her grandchildren Drew, Desirae, Trinity, and Maverick Mendez, Mila Brunner, and her great niece and nephew Winston, and Marie Fritz. A Life Celebration will be held 12:30pm Tuesday, December 7, 2021, at Adamson Life Celebration Home, 2000 47th Ave. Greeley, CO 80634. Interment will follow. Family and friends may leave condolences at AdamsonCares.com.