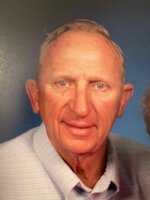 William "Bill” Starck, 81, of Windsor, passed away Saturday, October 23, 2021 in Loveland surrounded by his wife and children. He was born September 17, 1940 in Windsor to Theodore and Emma (Krenning) Starck. Bill graduated from Windsor High School in 1959 and with a Bachelor degree from UNC in Marketing in 1971. From 1963-65, he served in the U.S. Army before being honorably discharged. On March 31, 1967, he married Nancy Lee Goodeyon in Windsor, celebrating 54 years together. Bill, along with two of his brothers, owned Star Contracting. They completed many commercial contracts over the years. He loved fishing, floating the N. Platte River in Saratoga, WY as well as fishing in Montana but most enjoyed his grandchildren, following their many activities. Bill was a 31-year volunteer Firefighter with the Windsor Severance Fire Protection District, served eight years on Windsor Town Council and a past board member of Bethel Lutheran Church. Thankful to have shared his life include his wife, Nancy, children; Travis Starck and Sarah (Scott) Burchett, five grandchildren; Hunter and Gavin Burchett, Cody and Haley Starck and Madison Long, brothers; Kenneth (Raija), Ted (Kathy), Ed (JoAnn) and Bob (Claudene) as well as sister-in-law, Lore Starck. He also had numerous nieces and nephews. He was preceded in death by his parents and brother, Howard. Bill’s Life Celebration will be held at 10:30 a.m. Friday, November 5 at Bethel Lutheran Church, Windsor with a luncheon to follow. Memorial gifts may be made to "Bethel Lutheran Church” in care of Adamson, 2000 47th Ave., Greeley, CO 80634. Friends may leave condolences at AdamsonCares.com.